Preparing for economic collapse is a smart move for the self-reliant homesteader.  Of course we don't want such a thing to happen, but with the U.S. National Debt at such a frightening level, as well as the current high level of unemployment, such dire financial consequences do seem possible, if not downright inevitable. 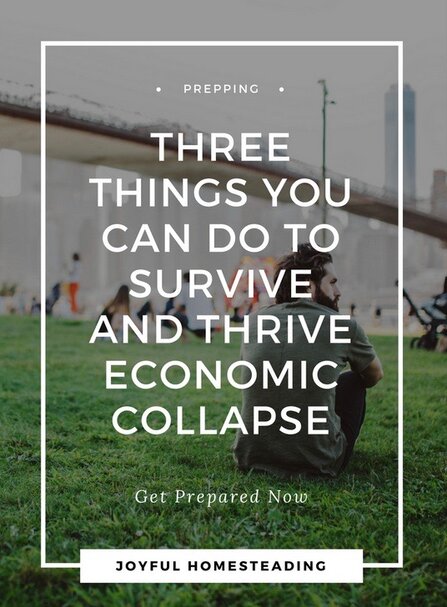 The reason it's crucial to study history is that it tends to repeat itself, and such is the case with past economic collapses.

Our economy is eerily similar to what happened in Germany before Hitler rose to power. 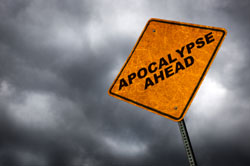 The Weimar Republic was drowning in debt, so they came up with the idea of printing more and more money (these days it's called quantitative easing) to help the economy.

At first, it seemed to help.  People had more money to spend, so they did, which created more jobs, at least for a while.

But produce a glut of anything and it loses value, including paper money.   Eventually the public lost faith in the German currency, and a terrifying economic meltdown occurred.  it took thousands of German marks to buy a loaf of bread, and workers were paid in cash at noon each day so they could run to the store and spend it as fast as they could before the marks lost even more value.

People on fixed incomes were in danger of starving to death.  Riots broke out, and vandals broke into supermarkets to steal food.  That's why preparing for economic collapse now is wise.  While we hope and pray such a collapse doesn't happen here, it just makes sense to prepare for it.

The good news is that you're reading websites such as this one, which means you are already thinking about self reliance and learning how to be prepared for an emergency.  You're way ahead of most people, who assume that everything will always be okay, even as our debt and prices continue to climb.

Stock Up on Food

It's also good insurance should hyper-inflation break out, which is what happened with the Weimar Republic.  Even if you do have a job, buying food to feed your children will be a lot tougher if bread suddenly costs $100 a loaf.

Your emergency food supply doesn't need to be fancy or expensive.   Beans are extremely healthy and also really cheap.  A year or so ago, I bought a 50-pound bag of pinto beans from Sam's club.  You can also buy bulk rice and pasta.  The eating won't be fancy, but should a crisis happen tomorrow, the important thing is, you will be able to eat.

Break up the bulk items into smaller quantities and put them in the freezer bags, pressing out as much oxygen as you can as you close the bags.  Then place the filled bags in a five-gallon plastic container.  I've had food last two years stored that way.

After that, start stocking up on your favorite foods.  Look for sales, and then buy as many as you can afford.  If you don't have room in your pantry, canned goods store just as easily under your bed.

I can't emphasize this one enough.  If an economic collapse does occur and the dollar is suddenly worthless, how motivated do you think utility workers will be to show up for work?  Power outages are a distinct possibility, and for those of us who live in the country, no power also means no water.

That's why preparing for economic collapse includes having a two-week supply of water on hand for each family member along with good quality filters.

Have an Alternate Source of Power

Have flashlights and extra batteries on hand at the very least.  A hand crank lamp (see one here) is also a valuable item to have on hand.  A solar powered generator will also be extremely helpful.

Return from Preparing for Economic Collapse to the Home Page