Urban Chickens and How to  Get A Chicken Ordinance Passed

Urban chickens are the dream of every urban homesteader, but they're not always legal.  Fortunately self-reliant chicken aficionados around the country have been fighting town hall for their right to a few humble backyard cluckers. 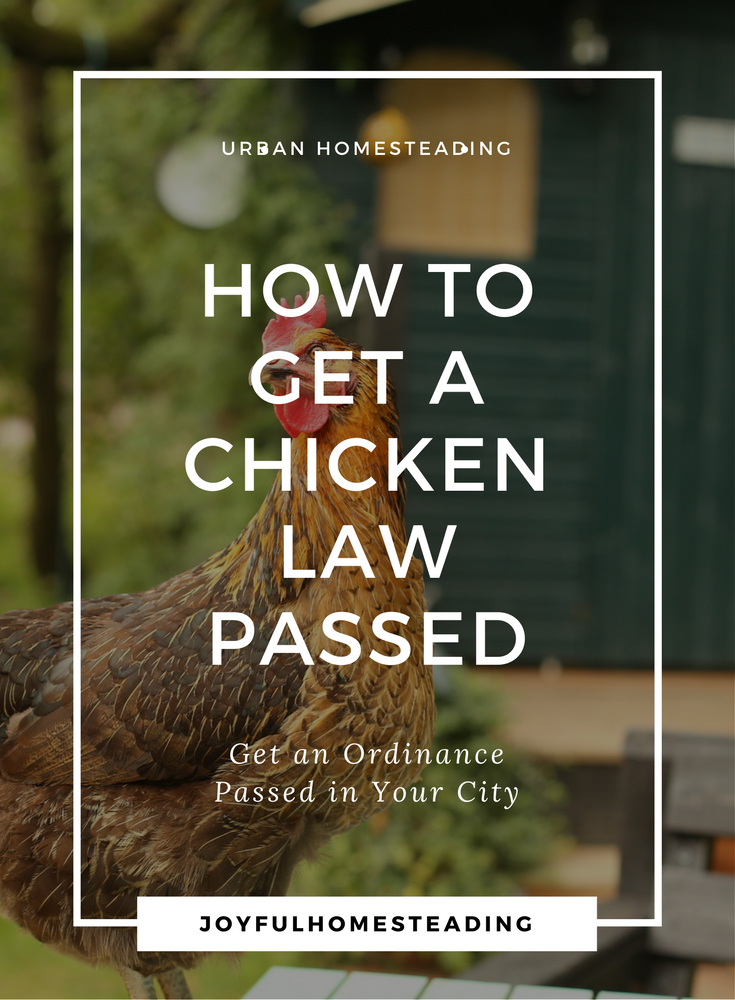 I'm fortunate enough to live in the country, so having chickens has never been a problem for me, but for those living in a nearby city of about 80,000 people, the right to keep a few backyard hens has been an ongoing battle for the past few years.

It's an upscale community of soccer moms, SUV's and mini-mansions.  But even in this land of high-dollar cappuccinos and designer jeans, a movement to bring in urban chickens has been afoot. 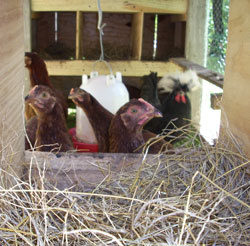 Some have kept chickens in their backyard illegally, hoping and praying their neighbors won't fink on them and call the city.  Others who were forced to give up their backyard flock are now taking action and have been working with the city attorney to write up an ordinance allowing hens kept in a backyard coop.

At the time this article was written the ordinance has been sent to the State Agricultural Department for review and comment before it's hopefully passed.

So if you live in a city that bans chickens, take heart.  Laws can be changed with time and persistence.  Here are some steps you can take to change the local laws to allow you to keep a flock in your neighborhood:

You need to find a group of like-minded folk willing to show up at town hall meetings to voice their support.  A good-sized group appearing at a city council meeting will make an impact on city officials, but you have to find those people first.  The best way to do that is online.  Visit Backyard Chickens or a similar forum and start looking for people in your area.

You can also create a Facebook page where you can post updates and get the word out about meetings and upcoming events.

According to John Thibault, author of the book, How to Change a Law, you need to write a clear statement to be effective.  So write a simple, easy-to-understand proposal outlining the benefits of having chickens.

Emphasize that hens are different from noisy roosters, and a few well-loved chickens kept in either a coop or chicken tractor aren't detrimental to the environment.

Make an appointment with the mayor to get a feel for how the council feels about urban chickens. Are they concerned about the noise? Or the smell? Is your mayor worried about one or two irresponsible people opening a chicken farm in town? A discussion with your mayor will give you an idea of how to word your proposal.

Go online and study the laws other cities have passed about urban chickens. Find one that is similar to the law you want to draft and copy it, changing it where needed.

This will not only give you an example of how an ordinance should look, but will also demonstrate to council members that other cities have done the same. Write out your proposed ordinance and make enough copies for every council member, the mayors and others.

Call the city clerk's office and explain that you are trying to get a chicken ordinance passed. Be courteous and humble. The clerk will explain to you what you need to do and make an appointment for you to address the city council. Usually, you will speak to the council at their next meeting under New Business.

Explain to the council about why you want a chicken ordinance passed, and give everyone a copy of your proposal. If you are lucky, the proposal will pass right away allowing urban chickens in your area.

If you live in a larger city, the proposal will likely be sent to a side committee for discussion. Attend all the extra meetings if you can.  In the meantime, start a pro-chicken public relations campaign to get your chicken ordinance passed.

Write letters to the editor of your paper, and get your friends and neighbors to do the same. If the side committee approves your proposal to have a chicken ordinance passed, then the full council will approve it as well.

If Your Proposal Does Not Pass

In the words of Winston Churchill: Never, never, never give up! Keep writing letters to the editor, get a petition going and keep trying. Get enough people interested in urban chickens and you will, eventually get your chicken ordinance passed.