Just finished reading your news letter again. You always have good stuff to read. The Foxfire book I already have. Never knew that the name came from something lighting up in the dark in that area. 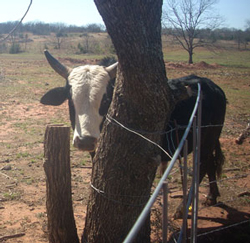 I have great news. My little farm is growing. Still learning a lot from 4-H and other forums that I have found on the internet. Anyway my hard work of being so picky on my heifers paid off.

I watched very close to see when they came in heat, and tracked it on the calender. Then after a year of learning their moods, I found a bull to borrow. I think I told you about it.

We're still in 101 breeding. The bull for the first month was nice. Then he got a little bully and I got scared. They came back to get him, thinking that 5 weeks was not long enough for first time. Well they came in heat always the first week of the month. And he was there one month and the first week of September.

We let it be. But again, keeping close watch. My Reba and Sara-lu started to act different. And Sara-lu started to nurse on Reba and they both are 2 years now. Well, that became a problem. It could cause damage to the udder and teats I was told.
So I had to get rid of Sara-lu. Almost had her sold. Also I thought Reba had milk, but beef cows don't have milk until they calf.

Well, this story gets even more crazy. I found some panels to keep them apart. One morning I was feeding them and noticed Reba had a swollen udder. I thought the worst. Mastitis!! I broke down and call the vet, who came out checked out Reba. No mastitis, and yes she has milk. Vet even said it was good drinking milk. Had good feel to it and looked very creamy.

Wish I had my carmera then. But of course not!!!!!!! Any way, From Sara-lu nursing on her, it started the milking to drop. So the vet said just leave it alone, till the calf comes.

Then I told him about the breeding in August and September. So he checked to see if they are pregnant. And not only Reba, But Sara-lu is too!!!!!

He said they both look good too. So I'm very happy, that my little funny farm is doing well. But the goat has to wait till I sell Sara-lu after the calfing and weaning.

Then I can start thinking of adding the goat. The chickens are laying, but I lost my sitting hen. I think our crazy Florida weather this year made her sick. I had two heat lamps in the coop. I'm still getting 8 to 10 eggs a day, and selling them at the flea market. I have a booth there.

Well, Hope all is well on your side. Just wanted to share the good news. Take care and hope the weather hasn't been too bad there.