Abducted - Book One
Of the Great Deception Series

Abducted is the first book in the Great Deception Series. 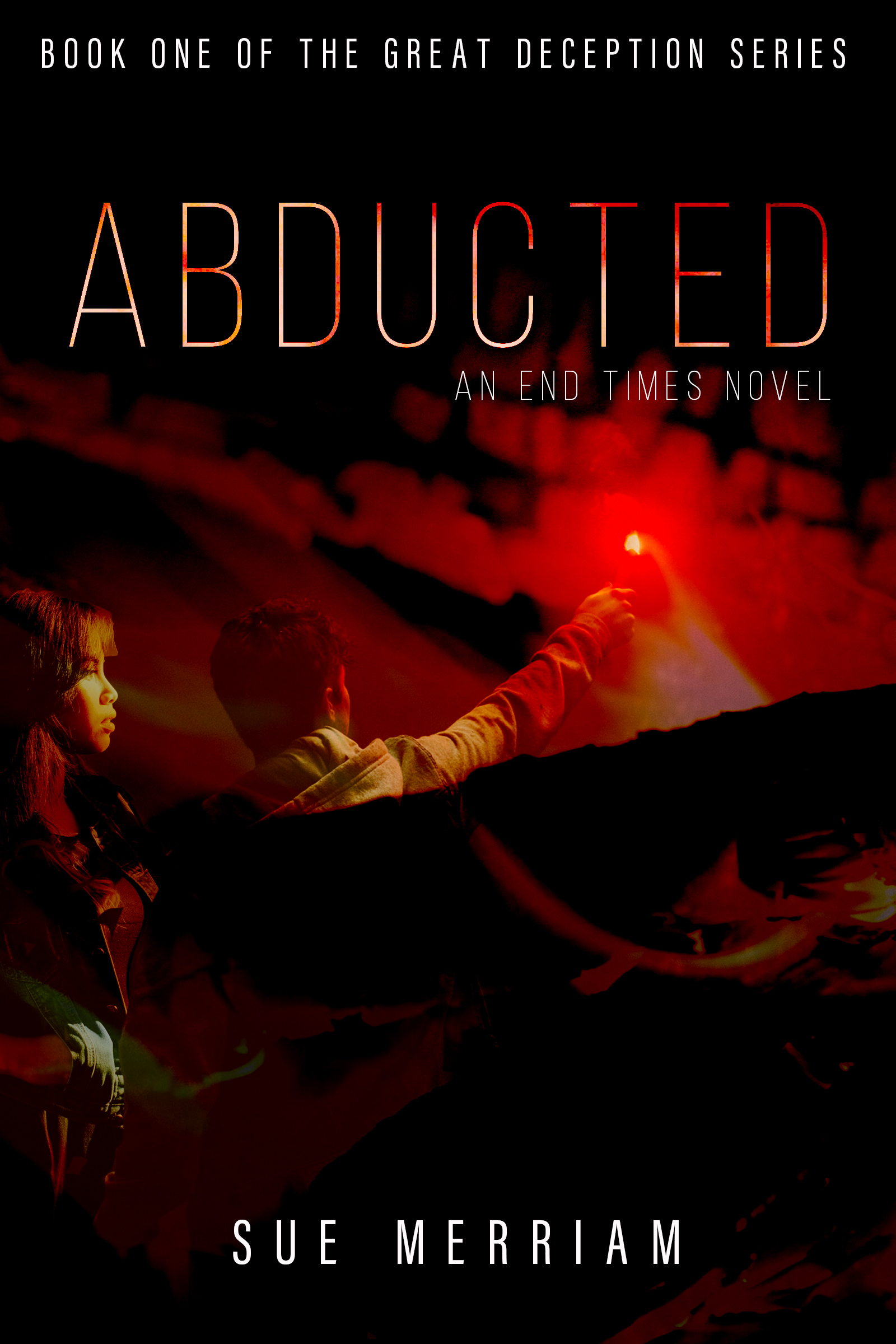 Snow fell in huge, billowing flakes outside the window, irritating John Becker to no end. He’d set the program to sunshine and blue skies before he'd left for work that morning.

The realistic weather displays were a feature marketing had touted as a luxury touch. A more practical reason was to keep the workers from going insane. When living and working below ground, illusion was key.

John reached for the remote which he always kept on the end table by the black vinyl sofa, only to find it missing. He’d have to stare at depressing, lead-gray skies until he could locate the confounded thing.

He hated snow. If he liked it, he would have stayed in South Dakota, where white flakes tumbled from the sky with annoying regularity, starting in October and lasting through March. On many an Easter morning in his youth he'd had to shovel the driveway and front walks in front of his home. Nothing cheery about snow.

And not only was it snowing outside, the air was downright chilly inside. Someone had adjusted the thermostat in his absence, which could only mean one thing.

He had a roommate.

John crept across the living room floor to the hallway leading to the bathroom on one side and bedroom on the other. Sure enough, the twin opposite his was laden with an open suitcase half unpacked, and a toiletry bag loaded with various sundries, including toothpaste and shaving lotion. The shirts strewn across the bed were sized extra-large.

On the floor beside the bed stood a haphazard pile of cases and what looked like camera equipment.

John heard the front door open and returned to the hallway in time to see a large man step into the living room and shut the front door behind him. The man had to be six feet tall with a wide girth and beefy hands.

“How’s it going?”  The man sounded uncomfortable and a bit sheepish.

The man clutched a paper-wrapped burger in one hand and a small sack of fries in the other. A spot of grease soaked through the bag. The smell of potatoes and rancid canola oil wafted in the air.  “I’m Phil."

“Great to meet you, John.” Banowski fumbled with the food, shifting it all to one hand before extending a paw, which John accepted. His hand shake felt greasy, and John resisted the urge to wipe his hand on his jeans afterward.

John retreated to the kitchen, opened a cupboard and retrieved a plate, which he held out to the man.  “You’re not supposed to take food out of the food court.”

Banowski blinked in confusion. “News to me. Why not?”

“They don’t want crumbs in the rooms.”

“But I bought food at the supermarket on the lower level." Banowski pointed to the fridge. "It’s in there.”

“I didn’t have any money." Banowski accepted the plate John offered. “The bank loaned me some.”

John nodded. “Nice of them, isn’t it? Of course, they’ll expect you to pay it back with your first paycheck.”

“The interest was a bit steep.” Banowski set his food on the plate.

“Anyway,” Banowski said, “I bought food at the store, which is here, in this apartment. I rearranged things in the fridge, by the way. I have the second shelf, and you have the top one, if that suits.”

“Kind of you.”  John walked over to the cupboard and retrieved a glass.

Banowski trailed after him, plate in hand. “But back to my point. I bought food at the grocery store, which I have to cook at some point, and eat here, correct?”

“Most likely, which you’ll have to clean up.”

“So, let me get this straight." The beefy man scratched his scalp with his free hand. "I can cook and eat food in the apartment, but I can’t take a meal that I bought from the food court home?”

“A lot of the rules don’t make much sense. But they want you to follow them anyway.” John set the glass on the counter and walked over to the fridge.

Banowski scrunched his face in perplexion as he walked over to the small dining room and set his plate on the table. “Okay. But it’s weird, and I’m not taking this food back to the food court.”

“I don’t blame you." John opened the refrigerator door and pulled out a bottle of tomato juice which he set on the counter.

Banowski blew out a puff of air. “Guess that explains why the servers didn’t put it all in a bag.”

The puzzled expression was back on Banowski's face. “What remote?”

“The one that changes the scene outside the window.”

Realization dawned on the big man's face. “Oh yeah. Nifty little gadget. It’s hot as the dickens topside, and I haven’t seen snow in like, forever, and I thought, wouldn’t it be great to make it feel like winter? So I changed the scene and set down the temp a bit. Hope you don’t mind.”

John stared at him. “I loathe snow. Where’d you put it?”

“The remote.” John took care to enunciate each word. “The one that changes the scene outside the window.”

“Oh.” Banowski rose and shuffled about the room as he lifted one thing after another. He searched their shared bedroom and then crossed over into the small bath. He returned moments later with the small black box in hand, which he held out to John. “Sorry. I get distracted sometimes and lay things where I shouldn’t.”

John pointed the remote at the window and clicked. Outside, the scene transformed.  First, to a fall scene where brightly colored leaves floated onto a bright green lawn. Then to a waterfall, the water flowing past along a mossy riverbed. Then a bright beach — his personal favorite — and finally a city skyline at night. John left it there, returning the remote to its resting place on the end table. “In future, Mr. Banowski, I’d appreciate it if you’d leave it here.” He pointed to the table.

Banowski unwrapped his burger and took a huge bite and then spoke around a mouthful of food. “Why are you calling me that?”

“Mr. Banowski.” With the wad of food he chewed, it sounded more like Mr. Banooski. The man rose and filled a glass with water from the sink. “You make me sound a million years old.”

John pulled a carton of eggs from the refrigerator, along with milk and butter. “We’re not supposed to call each other by our first names.”

Banowski took a sip of water and made a face. “Say the powers that be who hate crumbs?”

“How do they know what we say in our own apartment?”

“As serious as I know how.” John reached for the skillet along with a spatula, small bowl and fork. He whipped the eggs and milk while the butter melted in the skillet, then cooked an omelet, adding parmesan cheese and sliced olives. He ladled the food onto a plate and sat at the table.

Banowski joined him. He leaned close to John and whispered, “You ever see them?”

John cut a piece of omelet with his fork. “See who?"

The tomato juice. He'd forgotten it. John rose and filled the glass he’d set on the counter earlier with the blood-red juice. He stirred in a fourth of a teaspoon of cayenne pepper. He returned the bottle to the fridge and carried the glass back to the table. “Sometimes. Not as often as others do. You don’t see them much in the hydroponics department.”

“That your line of work?”

John took a sip of his tomato juice and savored the spicy flavor before he took another bite of his omelet. "What are you going to film?"

“Training films." Banowski shrugged. "Tips on successful underground living. A documentary on this place, stuff like that.” He leaned close and whispered once more. “Tell me where the cameras are at, and I can adjust them. Give us a little privacy.”

John wiped his mouth on a cloth napkin. “My last roommate tried that. Didn’t work out so well for him.”

John rose as he pulled a pen and a pad of paper from his pocket. Although he was careful not to look, he was fairly certain cameras were hidden behind the grills covering the air vents. Two were bolted into opposite walls that provided moving air into the combined living/dining area. He was almost certain one camera looked down onto the dining room table, but if John stood behind Banowski, he could write a note without it being recorded, which he did.

John scribbled one word, which he held before his new roommate.